Beckett’s masterpiece was staged this weekend at the Rio Grande Theater, Las Cruces. It starred Mark Medoff, the Academy Award winning author of “Children of a Lesser God” as Vladimir, and Richard Rundell as Estragon, and was directed by Jessica Medoff Bunchman, Mark Medoff’s daughter.

From the set, we immediately see this isn’t a traditional ‘Godot’. There’s an upturned trash can, a traffic cone, and a street lamp, with a backdrop of a chain link fence, the detritus of the 21st century, none of which are in Beckett’s original. We are, it turns out, in a park below Wall Street, Manhattan, in 2008 (post stock market crash). Other modern updates include selfies, fist bumps, and Godot’s use of a text message to say he won’t be coming today.

These revisions are minor distractions, which fortunately don’t get in the way of two masterful performances by Rundell and Medoff. The physical balance between them recalls Laurel and Hardy: Medoff as Vladimir is lithe and tightly wound, dashing here and there (and always nowhere), while Rundell – more amply built – is usually to be found slumped on the park bench and fiddling with his boots. 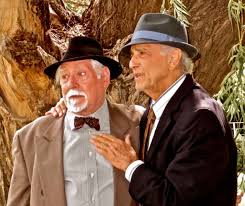 Vivian Mercier famously described Waiting for Godot as a play in which “nothing happens, twice,” but in this staging there is constant and effective “business” with hats and boots and gold chains and baseball bats.

The two leads dovetail wonderfully, and the lines are delivered with all kinds of pungent paralinguistic signals: whoops, grunts, groans, gasps, chuckles, and sighs. The lead actors’ timing is impeccable, bringing out the humor and the absurdity while never neglecting the tragic. The play’s two great speeches: “give birth astride a grave” and “was I sleeping while the others suffered?” are superbly delivered in fading light.

All in all, this was a timely reminder of Beckett’s genius and a brilliant evening.